As electric vehicles (EV) enter the mainstream, one of the biggest challenges will be what language and terminology we use to talk about them. Not only are they different than internal combustion engine (ICE) cars, but they are much more varied: from simple hybrids to plug-in hybrids, all the way to pure electric. Arguably a plug-in hybrid is different than an EV with a range-extender.

In fact EV's don't even have engines, they have motors, and power is normally measured in kilowatts, not horsepower (although equivalent). Just when you need William Safire!

Since the good folks at the EPA decided that this confusion needed to be sorted out, we now have a new (and mandatory) format for the window sticker for cars that have an electric component. Lets deconstruct it and see if it will make sense to normal consumers. 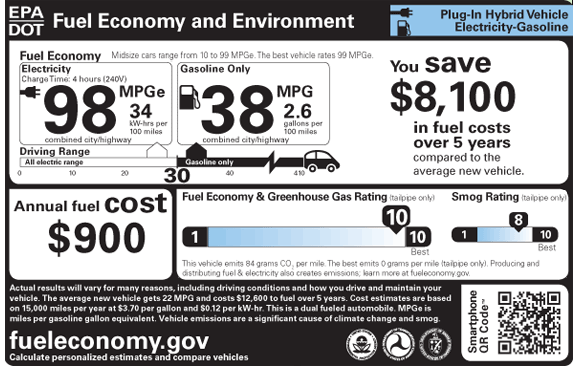 The first thing to note is the MPGe which stands for Miles per Gallon equivalent. Although not explained anywhere, it simply creates an equivalence between the energy stored in gasoline and electricity. In fact, 1 gallon of gas has 33.7kW-hrs of electric energy. However, now all of us need to get our heads wrapped around this one.

So why does the EPA give us two numbers? 98MPGe and 34kW-hrs/100 miles? This is not different than Europeans measuring gas mileage in liters/100km, which to them is totally intuitive, but I usually stare at my in-laws as if they were using some alien unit of measurement. Similarly the EPA gives us 2.5gal/100 miles in the next box, which may make some Europeans happy (but they may ask: what is a gallon?).

Buried in the first box is also the Charge Time, which will make even less sense as 2014 model year EVs get the "combo inlet", which accepts both AC and high voltage DC for fast charging. What if your car can accept a 6.6kW charger, but is plugged into a public 3.3kW charger?

Looking further we see the bar underneath that shows the electric range. This makes some sense for "range-extenders" but little for PHEV's that may go 10 miles in electric mode. In fact some cars allow the driver to switch between electric and gasoline (to conserve electric range for city travel), so how does one account for that?

Given that many drivers strive to stay in EV range, what are we to make of the schedule that the EPA has modeled of typical city driving?

Suffice it to say that this label will probably get an overhaul in a few years as new behaviors are better modeled. In fact, given the imminent arrival of DC fast charging, this sticker may already be obsolete.

For completeness lets us also examine the pure EV sticker, as this should be a breeze. 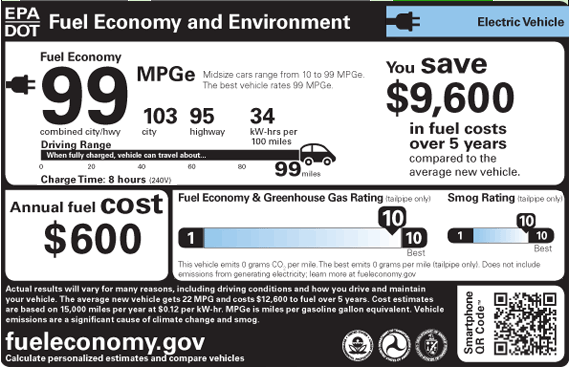 This is at least presented in a nice way, but five numbers to show Fuel Economy? We can certainly get rid of 34kW-hrs/100 miles! Most un-American. If I were shopping for an EV the range would be the most important number. The EPA website has some nice mouse-overs to explain the stickers.

My analysis only raises more questions than answers. What is clear is that this is an area of rapidly changing technology which is not amenable to neat stickers. In fact one can argue that the EPA's idea of a "schedule" will need to be updated as all sorts of public chargers sprout that are not paid by the kW-hr, but by monthly membership or even free as long as you buy something, have dinner, watch a movie.....

How will that be measured?